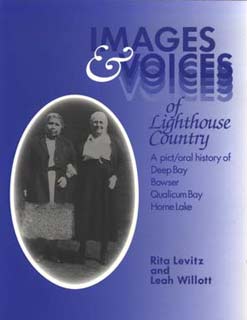 Local authors Rita Levitz and Lea Willott have captured the heart of Lighthouse Country. Packed with interviews, news clippings and over 150 black and white photographs, the unforgettable stories of life on the east coast of Vancouver Island, British Columbia in the early to mid-1900’s, come to life.

See never before published photos of Mike, Bowser’s remarkable bartending dog. Read accounts of the Wild Man of Horne Lake and the Cadborosaurus of Qualicum Bay. Listen to the compelling first-hand reminiscences of people who lived throughout the cannery fire of 1937, the Earthquake of 1940, and the boom and bust cycle of the fishing and logging industries. They are all woven together in this fascinating local history which traces the development of the unique communities of Deep Bay, Bowser, Qualicum Bay and Horne Lake.

The book is available at local stores, or contact Rita Levitz to purchase an autographed copy.

You’ll find a few exerpts from the book below.

Hugging the eastern shoreline of mid-Vancouver Island, Lighthouse Country encompasses almost 300 square kilometres, including the settlements of Deep Bay, Bowser, Qualicum Bay, and Horne Lake. The coastal setting along the Strait of Georgia, the natural safe harbour at Deep Bay, and the timber and maritime resources attracted both aboriginal and European settlers

Human occupation of the east coast of Vancouver Island dates back thousands of years. Fish and game were plentiful. Evidence of shell middens, fishing weirs, and stone tools are powerful reminders of the First Nations people who have lived here for generation upon generation.

European settlers began arriving in the late 1800’s. They were drawn here in their search for homesteads, or to work in the logging or fishing industries.

Nature formed the geographic outlines, but politics was nature’s handmaiden in shaping settlement and land use patterns. Large tracts of land, usually 160 acres, were made available to settlers through the pre-emption process. To qualify, the settler had to live on the land and make improvements to it. Only a British subject who was the head of a family, a widow, or a single man could apply for the Crown Land. Other men could give up their original citizenship, swear their allegiance tot he British monarch and become eligible. However, Chinese, First Nations, and single women of any ethnicity were excluded. 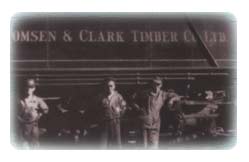 Part of British Columbia’s agreement to join Confederation in 1871 was the promise by the Dominion of Canada to complete the railway link from sea to sea. The E&N Railway Company, which was taken over by Canadian Pacific in 1905, acquired a land grant on Vancouver Island of over two million acres, as well as mineral and timber rights, for the extension of the railway. Early settlers were able to acquire land title from the E&N.

In the late 1890’s a road was completed to connect Lighthouse Country to the small villages to the south (Qualicum and Parksville) and to the north (Courtenay and Comox), thus making this area more accessible to new settlers.

Early subdivisions of the E&N land were designed to encourage further settlement. Between 1912 and 1914, the Vancouver Island Fruit Lands were created. These 96 lots west of Bowser were intended for agricultural settlement, but many of the large lots remained vacant, and some were subsequently returned to the Crown. Between 1913 and 1928, 91 rural and waterfront residential parcels were created in the Bowser area. 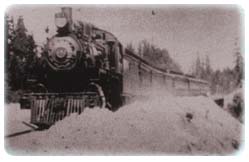 The land grants associated with the building of the railway gave the broad brushstrokes to the settlement, logging, and farming that was to come to Lighthouse Country. Roads, railways, and resources all played their part in the bringing together, or the separating, of people and places. Each of the settlement areas, Deep Bay, Bowser, Qualicum Bay, and Horne Lake developed their own unique personalities in the reciprocal moulding and shaping that occurs in the interaction between people and the environment.

Modern Lighthouse Country is a mixture of landmarks and businesses that have survived the decades, and new business that are trying to find their niche and unique ways of serving the community. It is made up of people, old-timers who remember how it used to be, and newer arrivals who may plan to stay a short time, but find their hearts taken by the beauty, friendliness, and relative safety of the area. It is a community of young families and retired homeowners. Loggers, fishers, trades, professional, and service workers have all made their homes here. This area is a vacation destination for tourists who are drawn here, as they have been for over three-quarters for a century, by the fishing, the climate, and the natural beauty of the ocean and the forests.

Lighthouse Country is also made up of the organizations that work tirelessly to make this community a place where people of all ages can find activities, recreation, common interests, and solace and support in time of need. All of this has made, and continues to make, Lighthouse Country a special place in which to live.